A budget forecast tool to project a country’s defence budget for the next 10 years has been integrated into IISS’s online relational database, the Military Balance+.

From mid-November 2020, the top 10 global defence spenders are included in the forecasts for the 20 selected markets, and all 20 account for 80% of global expenditure.

The IISS defence-budget forecast uses a Bayesian network-based model. The IISS determined the most important factors that shape defence-budget allocations and, together with a data driven model based on historical data, developed an econometric forecast model. The algorithm was developed in partnership with Objective IT’s data scientists

The Military Balance+ allows subscribers in the government, armed forces and private sector, as well as academics and the media, to assess defence developments promptly and build their own data analysis queries. The addition of the budget forecast tool enables a 20+-year view: 10+ years historical and 10 years projection, along with the ability to modify output for a more positive or negative outlook.

The new defence budget forecast tool is an exciting addition to the Military Balance+ and is the first to use an econometric algorithm to consider up to 45 variables simultaneously to determine the outlook. The ability to modify the forecast is also a unique feature and will help our members explore the opportunities and challenges these markets present.

The International Institute for Strategic Studies (IISS) is a research institute based in London, with offices also in Washington, Singapore, and Bahrain. The Institute was established in 1958, and is dedicated to delivering unbiased, analytical research specialising in international security and conflict.

The IISS has published its trusted resource, The Military Balance book since 1959. The Military Balance is an annual assessment of global military capabilities and defence economics. In 2017, their online relational database, the Military Balance+, was launched. With big plans to utilise data analytics, and IISS domain expertise, the defence budget forecast tool was fully released, with 20 markets, in November 2020. 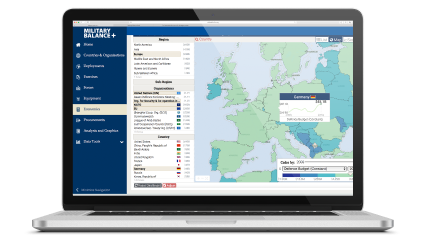 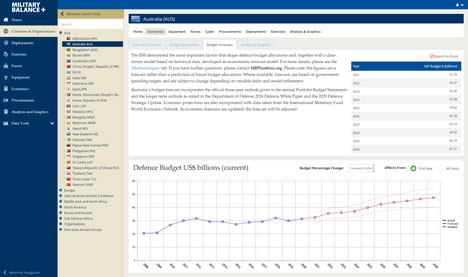 Starting with a proof of concept, the data analytics team at Objective IT were tasked with developing a data driven algorithm to compare three separate clusters of countries. The process involved, reviewing data, data tidying, feature engineering and data exploration. Three models were then developed by applying statistical methods using R. Following performance evaluation by the IISS team, the optimal model was selected.

Based on the encouraging results from the proof of concept a full analytics project, to build a defence-budget forecast using a Bayesian network model, was approved. This encompassed building, training and testing an econometric forecast algorithm by applying up to 45 highly correlated variables. The variable datasets included macroeconomics factors, defence-economic data, regime type, and war and International relations dynamics. IISS domain expertise was applied to shape the outcome for each country’s model.

With a soft launch in July 2020, the user interface was designed to determine defence-budget trends initially for selected markets: Australia, Russia, South Africa, South Korea, the United Kingdom and the United States.

Coverage has been expanded, and will be further overtime, to include most key markets worldwide.

Additionally, the tool offers users the ability to modify the forecast by applying percentage intervals in the range +25% to -25% to scale up or down the IISS projection for a more positive or negative outlook. This can be viewed as an overlay to the IISS projected figures.

Figures are a forecast rather than a prediction of future budget allocations. Where available, forecasts are based upon government spending targets and are subject to change depending on variable shifts and model refinement.
Start working with us today
Get in Touch
﻿
This website uses cookies to improve your experience. For more details please see Our Privacy Policy ACCEPT
Privacy & Cookies Policy